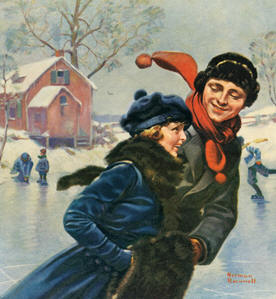 Skating is a great winter sport: among  its advantages are that it is a social activity that can be learned with or without formal lessons; it can be enjoyed indoors or out in the fresh air and sunlight; and it is a relatively low-cost, family friendly activity.

In fact, skating can be just about free to almost anyone near a frozen pond or lake. All you need is a pair of skates…and some common sense about safety.

So get up and go, but don’t start out without first reading these Ice Skating Safety Tips from the USDA:

Before going out onto a frozen lake, pond or river, it’s important to take safety precautions to reduce the risk of falling through the ice. Knowing how to judge ice conditions will also help you make more informed decisions while enjoying the pearls of winter.

Remember you take a risk anytime you go out onto the ice.

When ice fishing, it is always a good idea to drill test holes as you progress out onto a lake to help judge the thickness and character of the ice.

Beware of ice around partially submerged objects, such as trees, logs brush, embankments or dam structures.

Be aware of ice that forms at the edges of a lake during the fall and melts at the edges first in spring. However, ice generally should be clear at least four to six inches thick to support one person.

Be aware of ice covered with snow. Sometimes the snow serves as insulation. Other times, it has the opposite effect by insulating the surface from freezing.

Never go out onto the ice alone. A buddy should be able to rescue you or go for help if you fall through.

When changing locations on the ice always walk at least 10 yards apart from your buddy. If one person falls through the ice, the other can go for help.

Before you leave shore, inform someone of your destination and expected time of return.

Assemble a personal safety kit, no larger than the size of a man’s wallet, and carry it on your body. The kit should include a lighter, waterproof matches, magnesium fire starter, pocketknife, compass and whistle.

In addition to the above safety equipment, carry ice picks, a rope and cellular phone. These items could save your life.

Always keep your pet on a leash. If a pet falls through the ice, do not attempt to rescue your pet. Go for help.

What to Do if You Fall Through the Ice

If you cannot get out of the cold water by yourself, take the appropriate actions to extend your survival time while waiting to be rescued.

Stay calm. Do not attempt to swim, swimming will cause our body to lose heat much faster than if you stay as still as possible.

Use a whistle to attract help.

Act slowly and deliberately to conserve heat, and move slowly back to where you entered the water. Expect a progressive decrease in your strength and ability to move. Make the harder moves to attempt to get out of the beginning while you can.

If you are wearing a snowmobile helmet and your face is in the water, remove the helmet as quickly as possible because it can fill with water and cause you to drown. Hold onto it to keep afloat.

Once on the ice, try to push yourself forward on your stomach or roll on your side to keep the weight distributed over a greater surface area. Do not stand up until you have moved onto the ground or an area of solid ice.

So stay alert, heed these safety tips, and enjoy!

On Christmas Day in 1776, in snow and frigid temperatures, George Washington led his troops across the Delaware River, between Washington Crossing in Pennsylvania and Titusville, New Jersey.

Washington’s courageous leadership reversed the direction of events in the Revolutionary War against the British.  The New Jersey Department of Parks and Forestry explains:

“On December 25, 1776, the icy waters of the Delaware River provided the setting for one of the pivotal events of the American Revolution. The Continental Army had little to celebrate that Christmas and seemed beat by hunger and cold. After crossing the rough winter river at night, General George Washington and the Continental Army landed at Johnson’s Ferry, at the site now known as Washington Crossing State Park. At 4 am, they began their march to Trenton where they defeated the Hessian troops in an unexpected attack. This battle was quickly followed by the Second Battle of Trenton on January 2, 1777, and the Battle of Princeton on January 3, 1777.”

Each year at Christmas time, this extraordinary event is re-enacted in Titusville, with curious visitors coming out to see the place where Washington changed history, and to honor both Washington and the brave men who followed him.

A visit to Titusville, NJ, or Washington Crossing, PA, however,  in winter or at any time of year, is inspiring for young and old.  The towns surrounding the crossing site are charming and thought-provoking, featuring museums, guided tours, restaurants, and, especially for warm weather visits, beautifully maintained parks for outdoor enjoyment and picnics.

For more information about visiting Washington’s Crossing on the Pennsylvania side:  http://www.washingtoncrossingpark.org/#

For more information about visiting Washington’s Crossing on the New Jersey side: http://www.state.nj.us/dep/parksandforests/parks/washcros.html

Both visits can be made on the same day, as a bridge connects the two towns.

One can also view the renowned painting by American artist Emanuel Gottlieb Leutze (1816-1868)  painting, “George Washington Crossing the Delaware” (pictured above) in the American Wing of the Metropolitan Museum of Art in New York. Learn more about this famous work of art from an expert Metropolitan Museum’s curator.