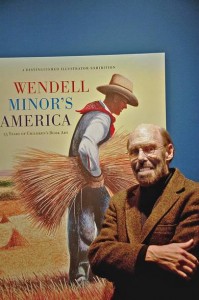 Award-winning illustrator Wendell Minor drew his way through childhood in Aurora, Illinois, inspired by the richly illustrated magazines that were so much a part of American life during the mid-twentieth century. Today he is considered one of our nation’s premier historical illustrators, traveling throughout the United States to research, draw and paint on location, and immerse himself in the subject at hand. Last fall Norman Rockwell Museum celebrated the artist’s four-decade career, highlighting his many cover illustrations and 25th anniversary illustrating children’s books, each inspired by his love of history, art, science, and the natural world—”Wendell Minor’s America.”

“Wendell Minor’s America” traced the personal and artistic journey of the acclaimed book illustrator and admirer of Norman Rockwell, through original artwork, artifacts, and references from Minor’s expansive visual chronicles, as well as commentary about his collaborations with our nation’s most prominent authors, scientists, and historians; highlights include original work from such books as “Reaching for the Moon” and “Look to the Stars” by Buzz Aldrin; “Sitting Bull Remembers” by Ann Turner; “Abraham Lincoln Comes Home” by Robert Burleigh; “Arctic Son” by Jean Craighead George; “Shane” by Jack Schaefer; and “America the Beautiful” by Katharine Lee Bates. The exhibition was accompanied by a catalogue featuring essays by many of the noted authors and editors with whom Minor has partnered.

Pulitzer Prize-winning author David McCullough, who has collaborated with the artist on such books as “1776,” “John Adams,” and “Truman,” who spoke at the exhibition, recently remarked that “Minor is always showing what he loves—the great outdoors, crystal night skies, the moon in all its phases, the plain vernacular architecture of American small towns and remote farm houses… showing what you love to your audience is the heart of effective teaching.  Besides being a supremely gifted artist and natural storyteller, Wendell Minor is a very great teacher—which is another reason why his work is of such value.”

“I always looked forward to a Norman Rockwell cover,” says Wendell Minor. “Somehow I felt he brought people and places to life. I distinctly remember his ‘Saturday Evening Post’ cover, ‘Breaking Home Ties’—in 1954 I looked at that painting and said, ‘I’m going to go away someday, to school and learn how to draw. I think every Rockwell painting that I saw gave me that sense of wanting to find that America.”

Presented through Norman Rockwell Museum’s Distinguished Illustrator Series, “Wendell Minor’s America” took museum visitors on a journey through history, from sea to shining sea, reflecting on the artist’s love of our country’s varied landscape and a deep respect for the environment.

Since his childhood in Aurora, Illinois, Wendell Minor (b. 1944) has had a romance with America. And as he explores more regions more closely, his love of the country grows with a vision that celebrates the beautiful, the lyrical. After completing his studies at the Ringling School of Art and Design in Sarasota, Florida, Minor began creating original designs for Hallmark Cards, as well as book publishers in New York City. His cover illustrations have enhanced more than 2,000 works.

The artist draws upon his lifelong affinity for environmental issues to create illustrations for children’s books, which he finds especially satisfying. They allow him to combine his love of the outdoors with his independent pursuits— including painting the landscape from life, in the tradition of classic American painters such as Homer, Hopper, and Wyeth. His wish is to inspire children to go out into the fields and woods and mountains to see wildlife in its natural habitat, and to give the children a positive perspective about the beauty that abounds in the world.

To research his children’s books, Minor has traveled from the tropical Everglades to the Arctic Circle to the Midwest to the Grand Canyon. He loves bringing the scenes of nature to children and is particularly close to the children’s books he has illustrated. Minor has said, “A picture invites the viewer into it and offers a sense of mystery. It lets the viewer become part of the process.”

His award-winning books have frequently been named on the annual lists for Notable Trade Books in the Field of Social Studies, Outstanding Science Trade Books, and IRA Teachers’ Choices. His books have also received the Oppenheim Toy Portfolio and Parents’ Choice Awards and been featured on PBS’s The Reading Rainbow.

Wendell Minor has had numerous solo exhibitions, and his work can be found in the permanent collections of Norman Rockwell Museum, the Illinois State Museum, Muskegon Museum of Art, Mattatuck Museum (of Connecticut), the Mazza Museum at Findlay University, the Eric Carle Museum of Picture Book Art, Museum of American Illustration, NASA, Arizona Historical Society, U.S. Coast Guard and the Library of Congress.

He is a member of the Board of Trustees of the Norman Rockwell Museum in Stockbridge, Massachusetts, he serves on the Advisory Council for the Connecticut Center for the Book, and is a member of The Children’s Book Council (CBC), a non-profit trade organization dedicated to encouraging literacy and the use and enjoyment of children’s books. Referring to himself as a “recovering dyslexic,” he speaks in classrooms across the country, sharing with students of all ages the difficulties he experienced with reading as a child, and for those who have similar difficulties, how they too can overcome them.

Minor lives and works with his wife, Florence, and their two cats, in rural Connecticut.